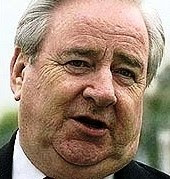 Bigot, homophobe and arch-conservative, the Reverend Jerry Falwell, has shuffled off this mortal coil at last. What a shame there isn't a hell for him to go to. This is, after all, the man who founded the Moral Majority; who warned that the Teletubby Tinkie-Winkie was part of a homosexual propaganda campaign on the basis that he was purple and had a triangular antenna; who said that "AIDS is the wrath of a just God against homosexuals... AIDS is not just God's punishment for homosexuals; it is God's punishment for the society that tolerates homosexuals."

Perhaps my favourite Falwell quote, though, is in the wake of the attacks on the World Trade Centre on September 11, when he said, "I really believe that the pagans, and the abortionists, and the feminists, and the gays and the lesbians who are actively trying to make that an alternative lifestyle, the ACLU, People for the American Way… all of them who have tried to secularize America… I point the finger in their face and say 'you helped this happen'."

Falwell was also a racist: a segregationist Baptist preacher, who opposed interracial marriage and used the Bible to justify his position. In 1958, Falwell gave a sermon on segregation, stating that. "The true Negro does not want integration...He realizes his potential is far better among his own race... It will destroy our race eventually......It boils down to whether we are going to take God's Word as final." Admittedly as racism became less popular, he - publicly at least - changed his stance on segregation.

What a charming piece of work. Definitely someone that the world is better off without, I reckon.
Posted by richardwatts at 10:41 am

hey spunk, i'm glad i read your blog first today! i had a post on falwell all teed up called "good riddance to bad rubbish". great minds etc.

maybe now i can use that title for one on eddie...

[though "boned" is tempting]

You don't realize that Jerry Falwell didn't hate or have a dislike for people who choose to live a gay lifestyle. He hates the sin. Every Christian should openly hate sin and work to help people be free from it. But to hate the sinner is wrong. One can effectively hate the sinner and help at the same time. Falwell knew that and he spoke out against the sin. All can be free if they choose to accept Christ into their lives, repent and accept Him as Lord and Savior of your life. Strive to live according to God's Word and and you'll gain your spot in Heaven for all of eternity... otherwise you'll burn in Hell. But that ain't where you wanna be. Just turn to Him and He'll show you the way!

Sinjin, what......ever. This is a pointless exercise, but where do you get off saying that queers are sinners? What must be life be like for the tedious and oh so sure of themselves fundamentalist. As someone with a strong attraction to the same sex, I say, nuts to you and see you in hell fundo.

Sinjin, your entire statement is automatically invalidated from the get-go by your use of the words "people who choose to live a gay lifestyle". Even so, I respect your beliefs enough that I'll engage with them for a moment, despite my feeling that you didn't really read and analyse my post in detail (so how about you go back and re-read that bit about segregation for a moment).

Okay, so, I didn't chose to be gay. Why would I chose a life that makes me a second class citizen in the eyes of Australia's politicians, for starters, and that provides bigots with an excuse to beat the shit out of me (as has happened on more than one occasion)?

Sure, you might want to argue that I 'chose' to act on my sexual orientation; that I could instead ensure that I don't sin by denying, repressing and locking down my innate desire to love and be loved by another man.

To which I would respond: is not one of the central teachings of your religion that 'God is love'?

If so, then to know God, we must know love; and were I to shut myself away from the possibility of love, then I would be denying God.

That said, I don't believe in yours or any other deity, but I do believe this: assuming, for the sake of argument that there is a God, then She made me as I am, my sexuality included.

And finally, if you're going to maintain the belief that homosexuality is a sin because to 'lie with another man as with a woman is abomination', then you'd better start paying attention to the rest of Liviticus as well: or are you uncomfortable with the idea of stoning to death children who disrespect their parents, and burning prostitutes alive?

OH, YOU SO GOT BURNING HATE COMMENT FROM A CRAZY CHRISTIAN.

LOL. I'm so gonna burn in hell - side by side with Michelangelo, Oscar, Rimbaud, Lorca, St Derek Jarman, Sappho, Martina... it's gonna be one hell of a party!